On my way to try out the business classes of all five-star airlines I was especially excited for this one: the ANA business class is said to be one of the best in the world, combining the highest level of service with a beautiful Japanese touch.

During my last travels to Japan I was able to fly with he All Nippon Airways Business Class from Tokyo-Narita to Düsseldorf, using the Boeing 787 Dreamliner. Check out the following trip report and photos to see for yourself if my high expecations have been met! 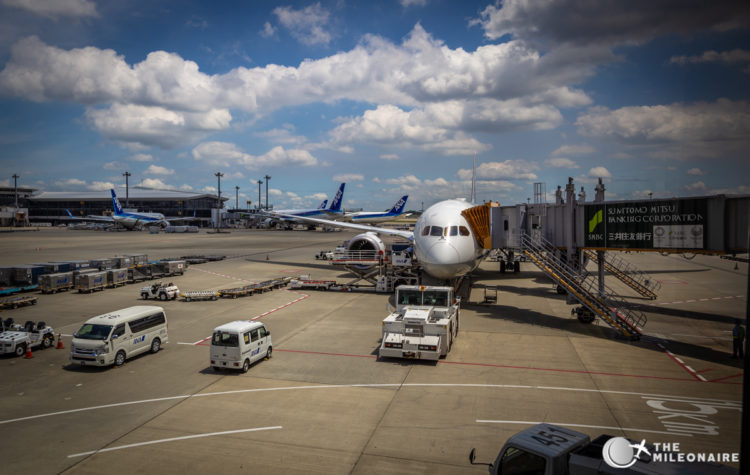 All Nippon Airways uses a 1-2-1 configuration in its newer longhaul aircraft, which is designed in a staggered setup – which means that the seats are offset to allow space for the foot rest. While the two middle seats are great for couples, the single seats are perfect for solo travellers. I reserved one of the ‘true’ window seats (4K) in the 787, as the odd-numbered rows are further away from the windows. 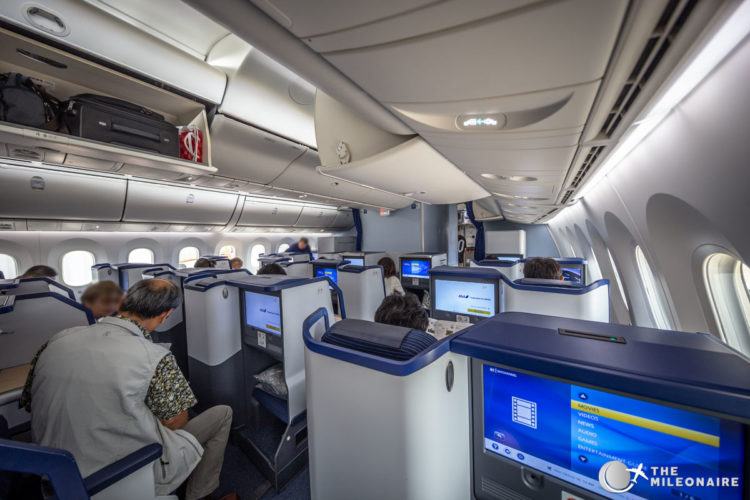 The nice thing with this configuration is that every seat has aisle access. The middle seats also offer more privacy than other middle seats as they are further apart – so no reason to get intimate with strangers on the flight. 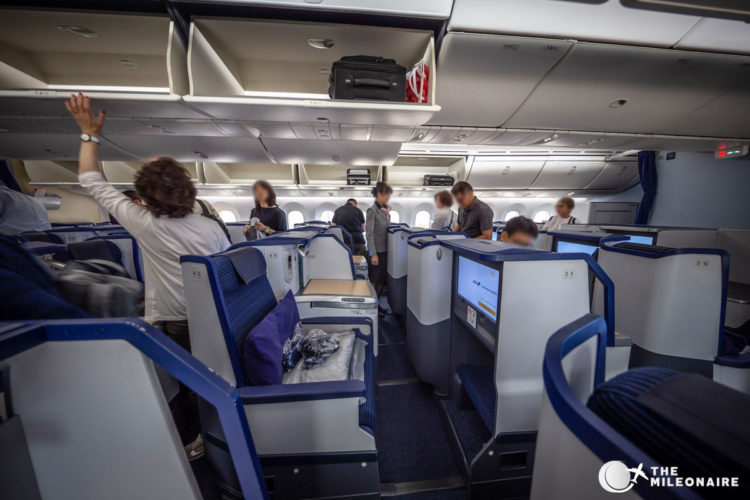 The cabin design of the ANA Business Class features bright grey colors, combined with dark blue accents and seats. This generates a modern design pattern, but it feels also a bit sterile. Another positive result is that the cabin feels super bright, also due to the large Dreamliner windows.

As I mentioned above I reserved the window seat 4K in the Business Class. This seat offers the maximum privacy in the cabin, as the small table besides it acts as a small divider from the aisle. 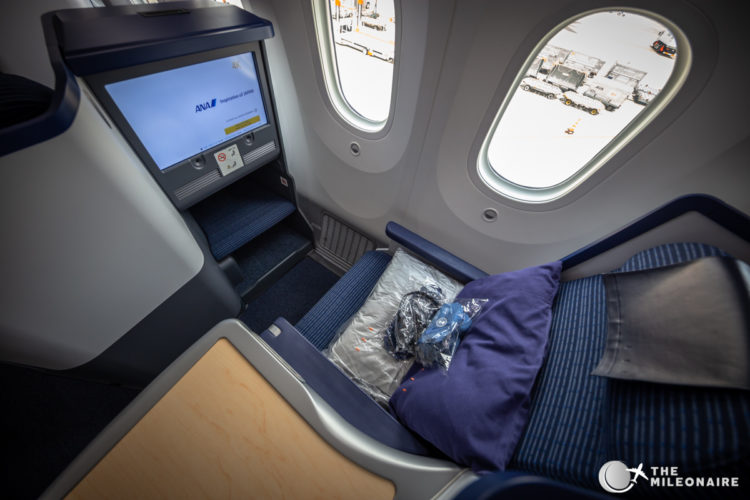 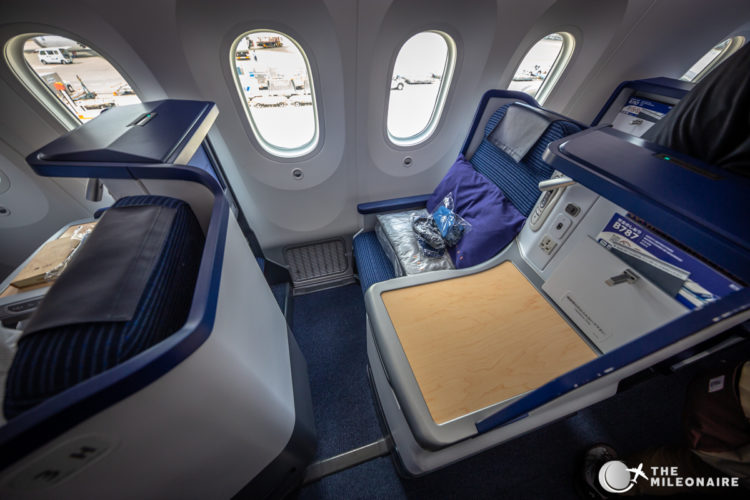 As with most other business classes there’s an ottoman in the foot space, where you can put your legs during the whole flight. Above that is the screen which is not particularly large for a business class. 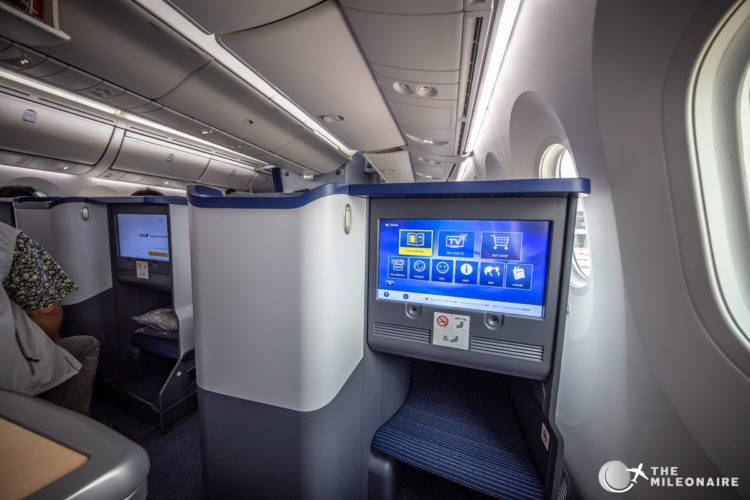 The seat in the ANA Business Class is a lie-flat seat, which means you can convert the seat to a full bed. The controls for that are located next to you: 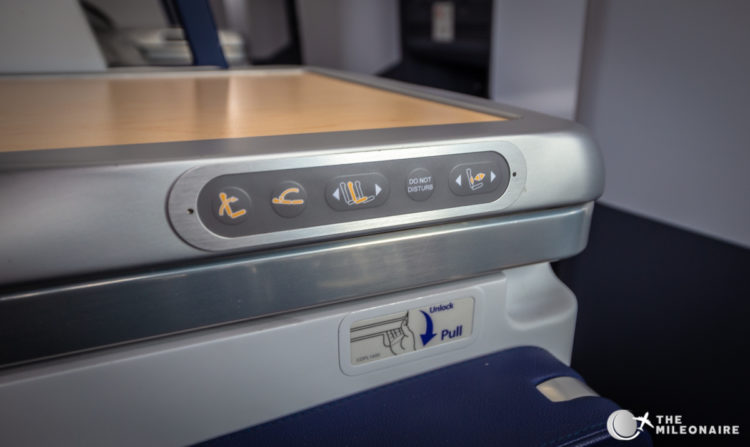 There you’ll also find some additional useful features: a small handheld to control the inflight-entertainment system, several plugs to charge your devices and a reading light. ANA’s IFE was a bit disappointing, as the variety of movies and music albums was lacking. 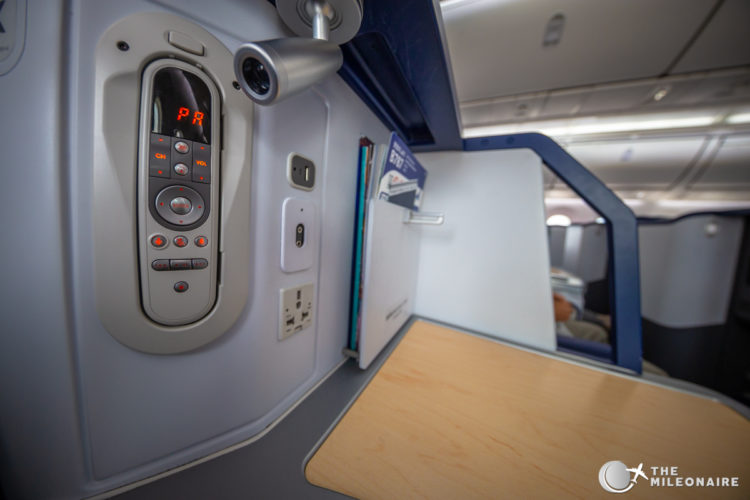 When you’re boarding you find quite a lot of things at your seat already. There’s a pillow and a blanket, as well as a duvet cover to convert your seat to a bed. 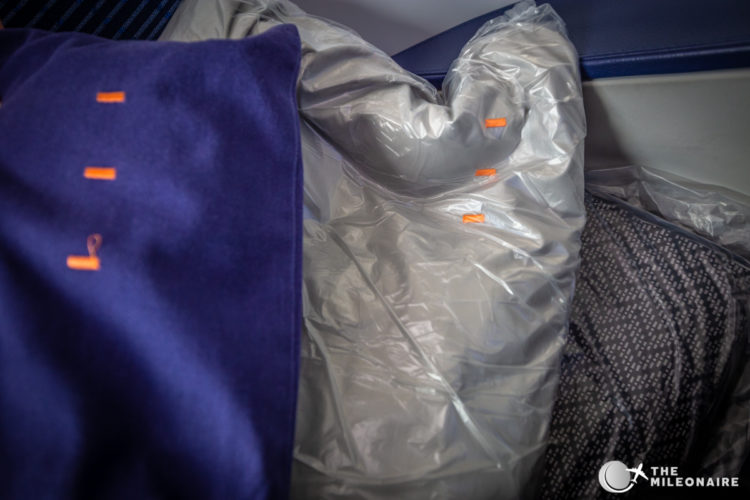 There are also slippers for the cabin… 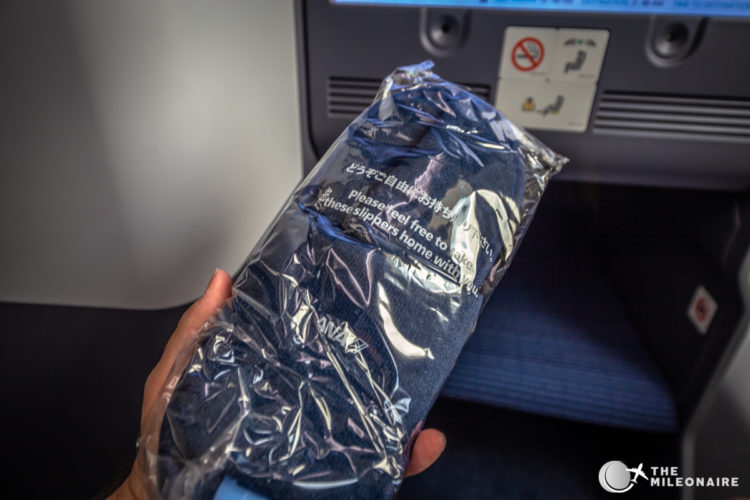 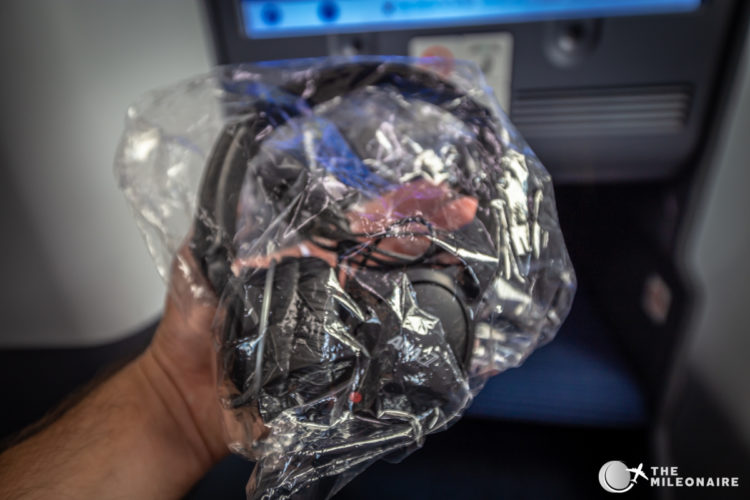 …and an amenity kit. 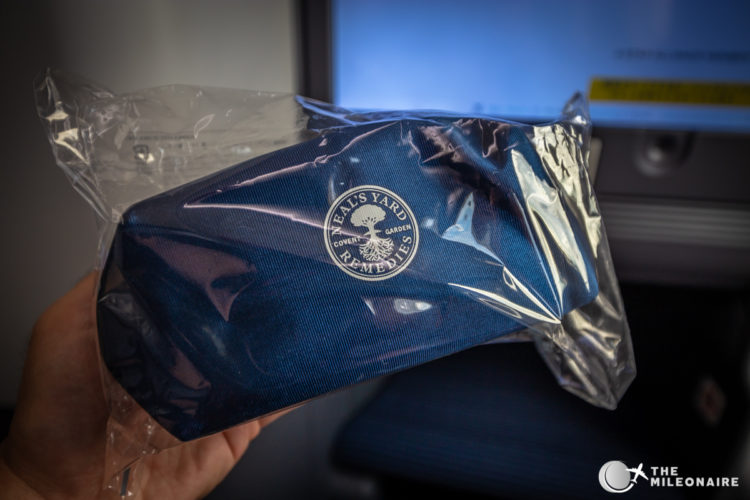 All in all I really liked the ANA business class seat:: the level of privacy is good, the seat itself is comfortable and the bed large enough to get some solid hours of sleep. The only downsides were a few signs of wear and the lack of some blinders to provide additional privacy.

The true highlight of the ANA Business Class is the service though – this was where I truly experienced the five stars I was expecting. The start was a bit slow though, as the first round of pre-departure champagne was served in a plastic cup (why no real glass?): 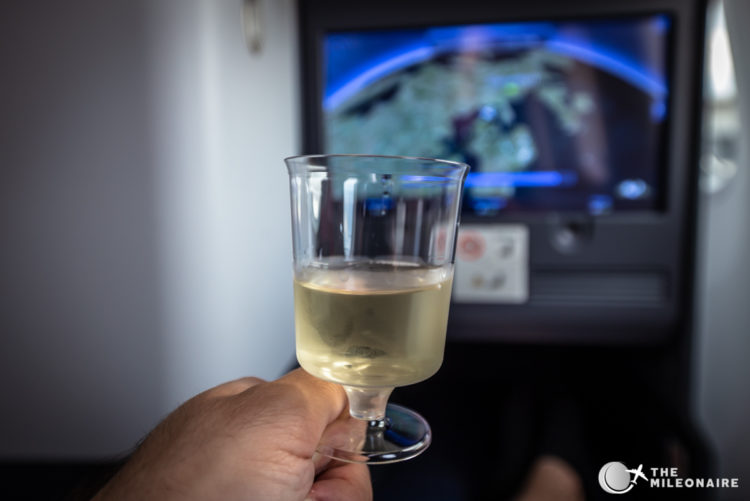 ANA serves Castelnau Cuvee Brut Reserve as their onboard champagne, which is a rather inexpensive one (but still tasty). Afterwards the cabin crew brought hot towels on small plates.

At this point I started to study this flight’s menu which consisted of an International and a Japanese option. 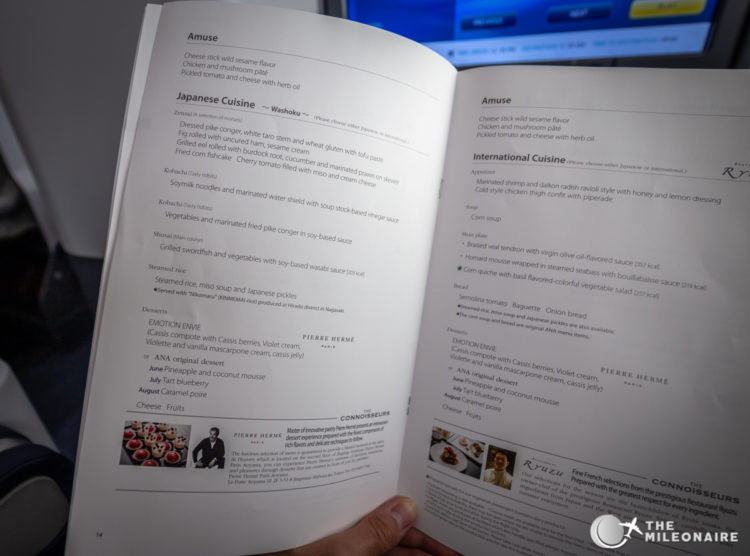 The drinks menu was equally impressive as it offered different wines, a selection of Sakes or Shochus and non-alcoholic beverages. A nice little detail: with Asahi, Sapporo and Kirin all major Japanese beers are available on ANA flights. 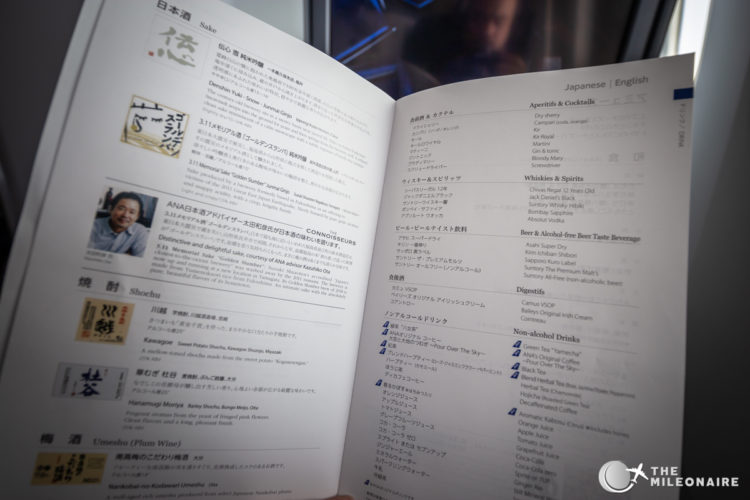 The (warning: spoiler!) excellent food service started with another round of champagne, this time in a real glass (although no champagne flute): 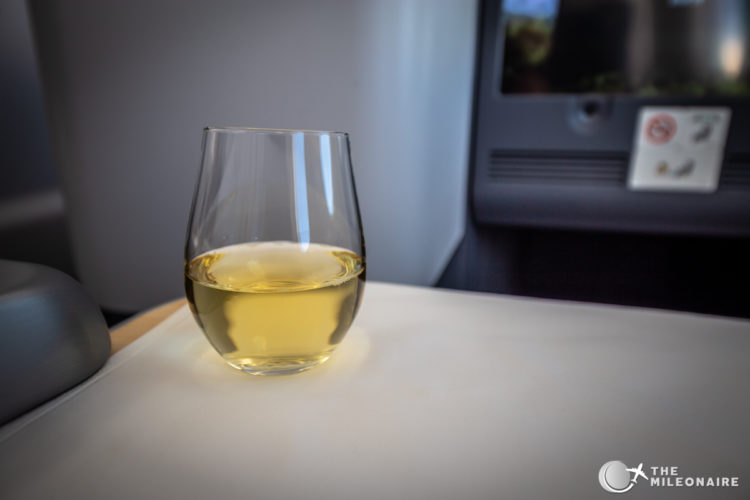 As an amuse gueule the stewardess brought an interesting trio of cheese/sesame sticks, chicken/mushroom pâté and tomato/feta: 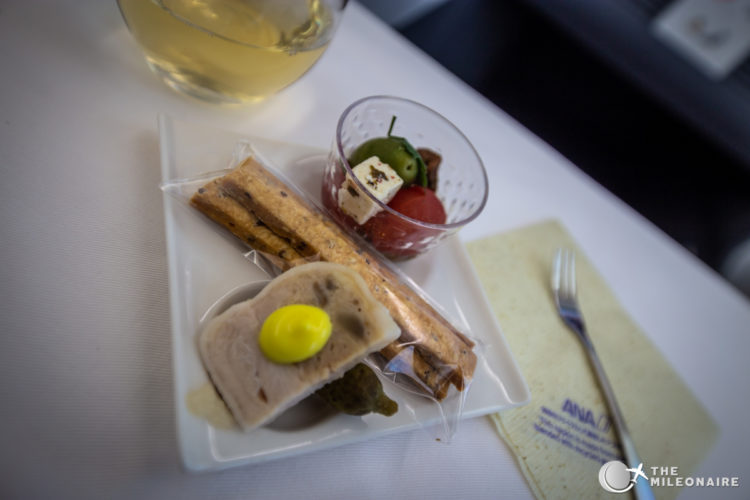 I chose the Japanese menu for this flight, and after the amuse I started with the Zensai as my appetizer: 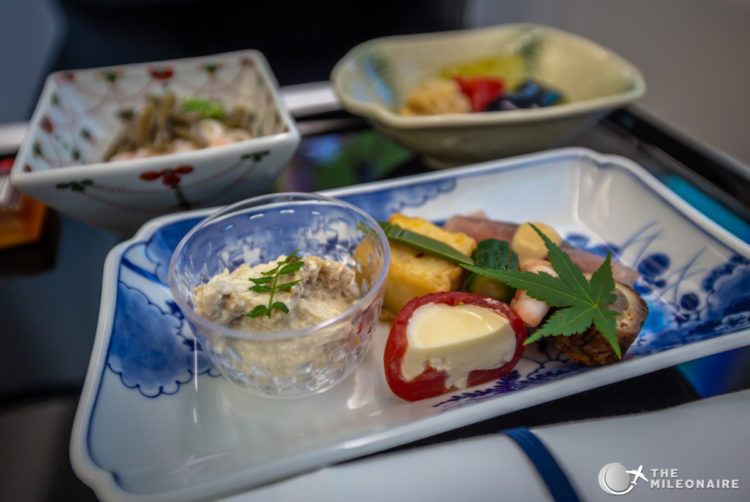 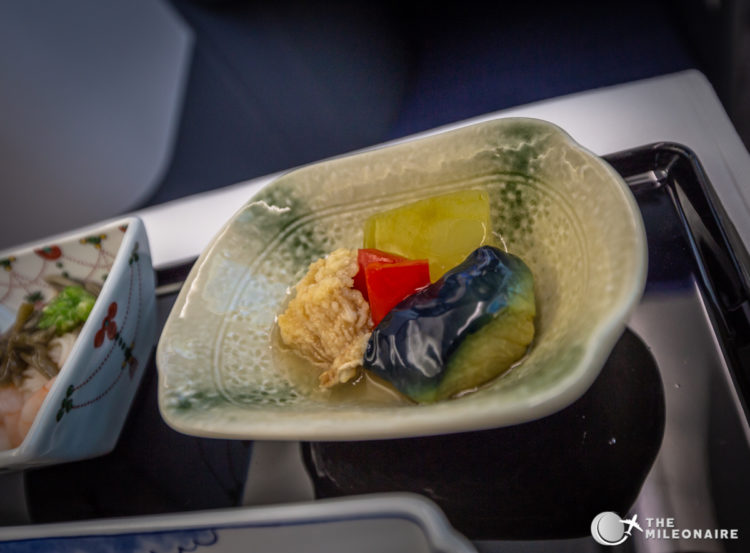 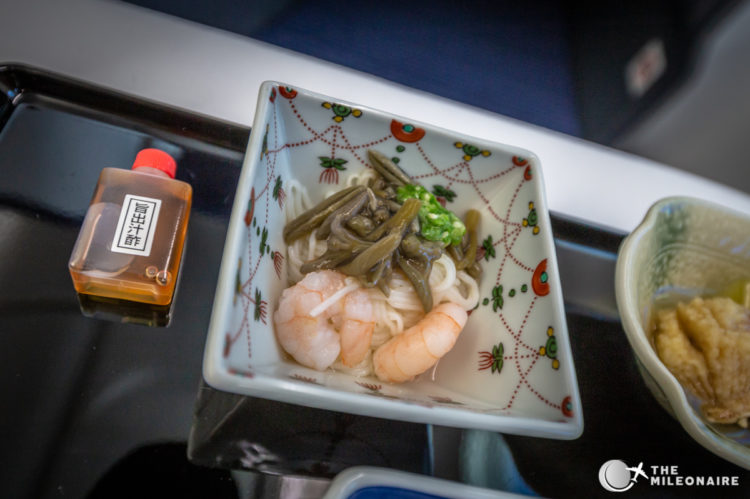 As you can guess from the photos, each of the appetizers were sensational – super interesting tastes all across the board, combined with a beautiful presentation in original Japanese porcelain. Afterwards I went for the grilled sword fish with miso soup and rice as my main: 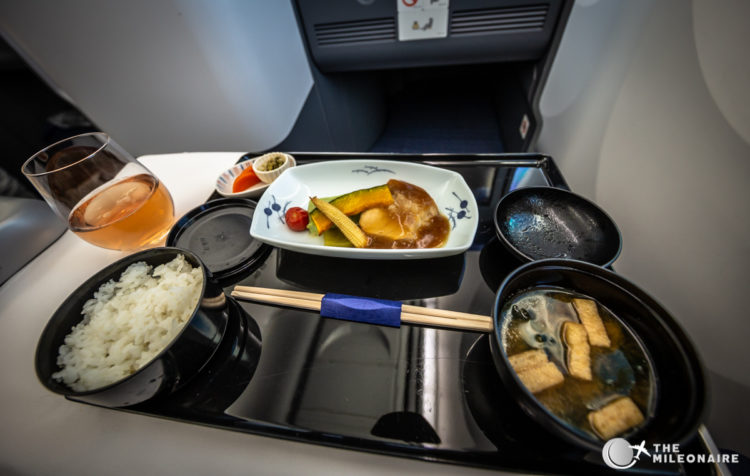 To top it all off I had the ‘Emotion Envie’ as dessert, which was created in collaboration with Pierre Hermé:

Great taste, but sadly served in a plastic cup.

After this delicious meal service I converted my seat to a bed, and slept for a couple of hours.

Around three hours before landing in Düsseldorf I woke up and felt a bit hungry. The menu offered an impressive selection of snacks you could get at any time throughout the flight. I ordered an Okonomiyaki first, knowing that you’d normally need a grill to make it properly. Of course the one I had in Osaka was better, but I was highly impressed how the ANA one tasted given the limited resources onboard. 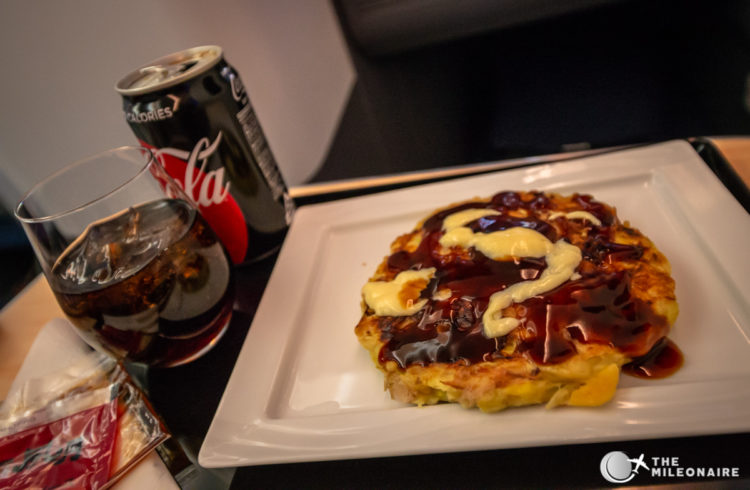 I also wanted to try the Ramen soup; it was tasty as well, but very different from the Ramen restaurants you might know from Tokyo or Kyoto. 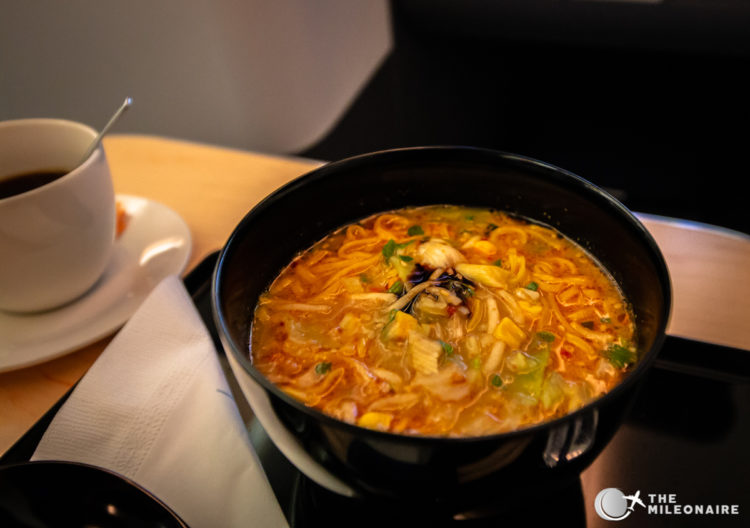 After a wonderful flight with a great crew we landed in Düsseldorf, and my flight with the ANA business class came to an end.

All Nippon Airways’ business class is a spectacular way of travelling, especially due to the outstanding food on board. The food alone made this flight worth it, but the hard product and the service are also among the best in the industry. A wonderful product!