I was able to go back to South Korea in Summer 2016, and I finally wanted to do a trip to the DMZ and the North Korean border. I’ve always missed that incredible experience, but this time I could make it work!

Just to add some historic background (skip if this bores you): North and South Korea are still officially “at war”, but have a “cease-fire” since decades now. The border between the two Koreas is now a demilitarized zone (“DMZ”) that acts like a buffer zone, guarded by the UN. On both sides there are soliders staring at each other, and nowhere else the tense situation between the countries gets more obvious and scary. If you also want to do a trip to the DMZ and North Korea’s border, you will have to sign a form that you’re the only one responsible if something happens to you. Scary, isn’t it?

Due to all these reasons, taking a trip to the DMZ and the North Korean border is a bit tricky: you can’t go there on your own, only some selected group tours are allowed to enter the DMZ. Sadly I had to find out that booking a tour just four days in advance is a bad idea; all tours have been sold out already at that point. After a few mails Panmunjon Tours saved the day by offering me the one last seat available on that day. Bottom line: book your tours early!

On the day of the DMZ tour I headed over to the Lotte hotel very early, as multiple tours depart there. You pay your tour fee and take a small bus towards the border, together with around 15 other travellers on the tour (mostly European or American). The first part of the tour is the trip to the border that takes about an hour before you arrive at Dorasan Station.

The first stop of my “combined tour” was the Dorasan Train Station. This train station is the last stop in South Korea, and where workers formally took trains across the border to work in North Korea.

Even though the relatively empty train station isn’t extremely spectacular, it gives a good first taste of what’s to come.

The next stop of the DMZ-Tour was “Dora Observatory“. From that observatory you can have a panoramic view of the North Korean town Kijong-Dong, which is also known as “Propaganda Village”. The village itself is deserted, but at least there’s a huge flag pole (higher than the one in South Korea, obviously).

You’re only allowed to take photos from behind a so-called “photo line”, and there’s multiple Military Police to make sure you follow that rule.

The next stop of your tour bus will be the “3rd Tunnel” most of the time. North Korea has dug various small secret tunnels across the border, so they would be prepared to send their troops down South for a potential invasion.

Of course there’s a ton of other busses with tourists from East and West. You’ll receive a hard hat and a place to stow your camera gear (not allowed, sadly) before you head down to the tunnel with a small train. They do have a replica of the tunnel to take photos of though:

Interesting and a little bit scary: barbed wire and signs all over the place that indicate minefields:

The next stop of the DMZ tour leads you to the Freedom Bridge and Unificiation Bell. Close to Imjingak is an amusement park (weird setting, I know) that used to be there to brighten up the mood of separated families at the border. There’s a railroad engine with lots of battle scars, as well as the “Unification Bell”: 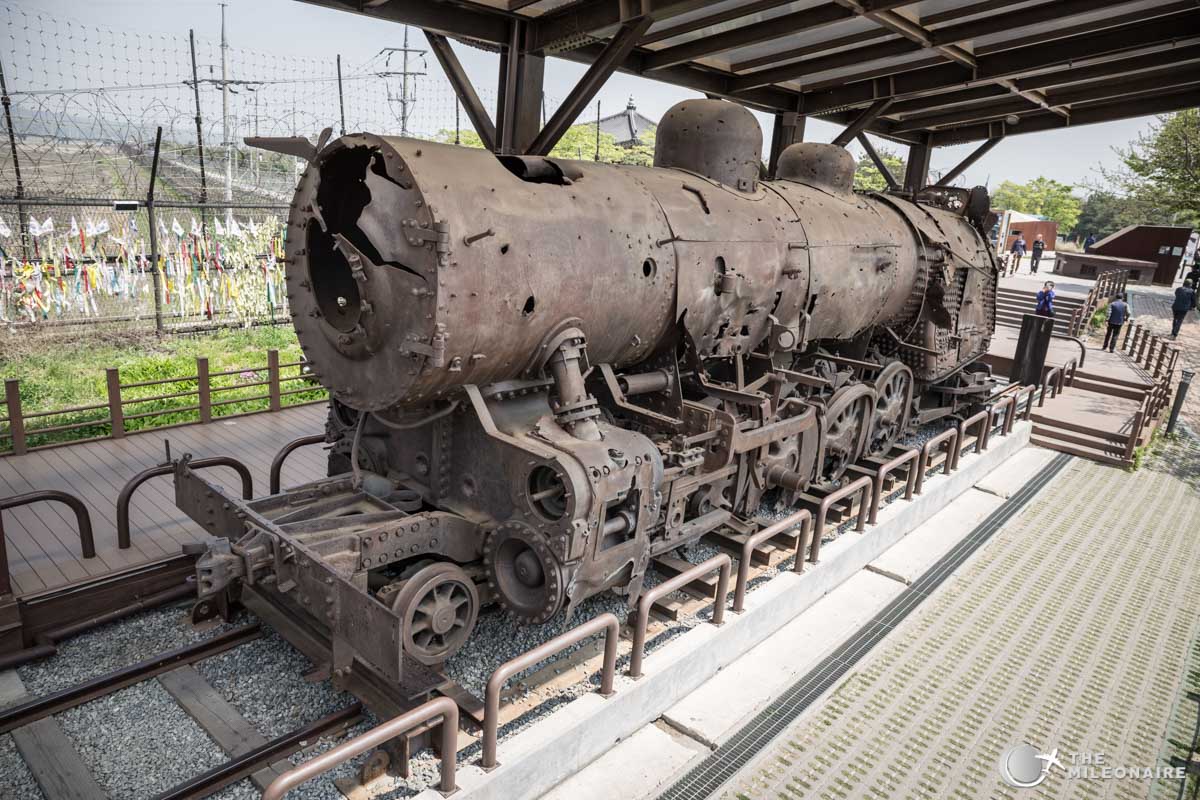 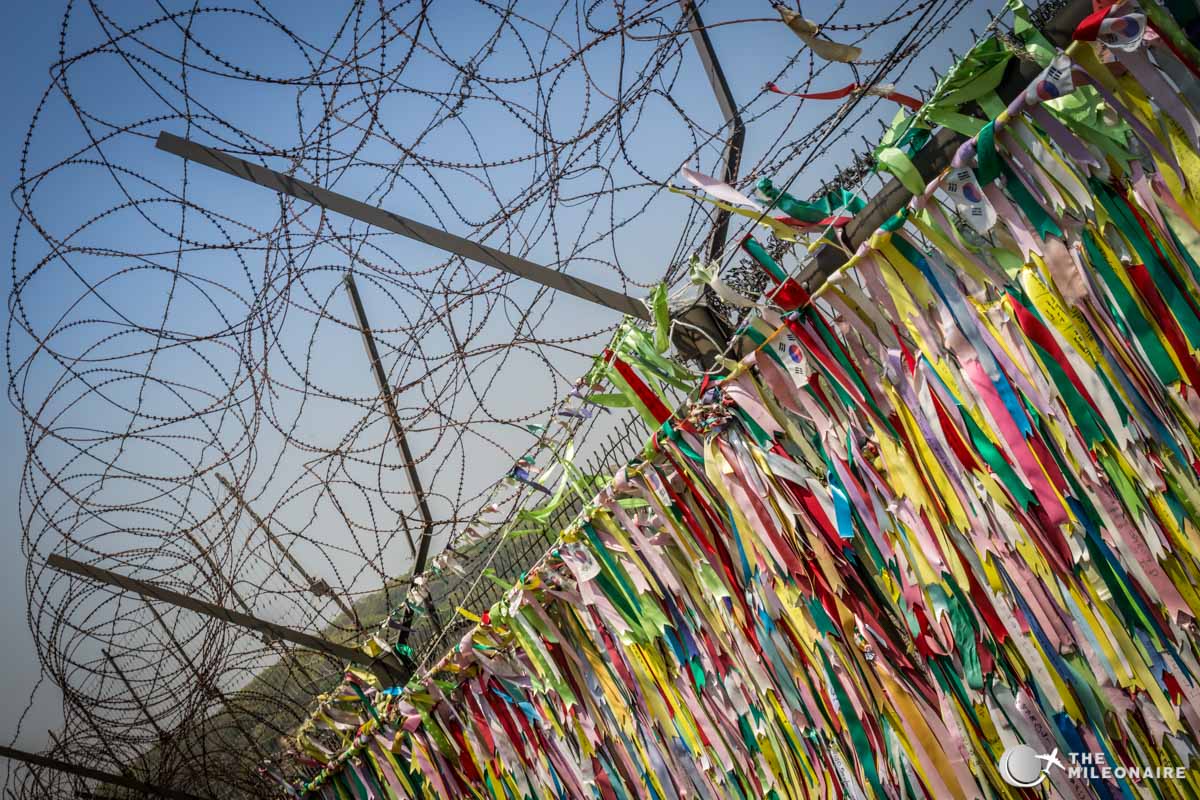 The absolute highlight of the DMZ tour followed afterwards: the North Korean border! After multiple passport controls you’ll reach “Camp Bonifas”, where Military Police explains the most important rules to follow in the DMZ:

From Camp Bonifas you’ll change busses, where two soldiers (USA & South Korea) are required to join your tour. You’ll get out the bus and walk towards the border, where a super scary atmosphere is omnipresent:

The blue huts in the middle are actually built across both borders, and have a door on each side. They are used for diplomatic exchanges in the Joint Security Area, and entering them only happens with supervision from both sides of the border.

Suddenly the whole trip got even more exciting: a group of North Korean soldiers suddenly came marching towards the hut, maybe to scare some Western tourists. Even if I don’t know the exact reason, that was a super scary situation:

After this super impressive stop we headed back into the bus to visit the “Bridge of no Return” where agents have been exchanged in the past: 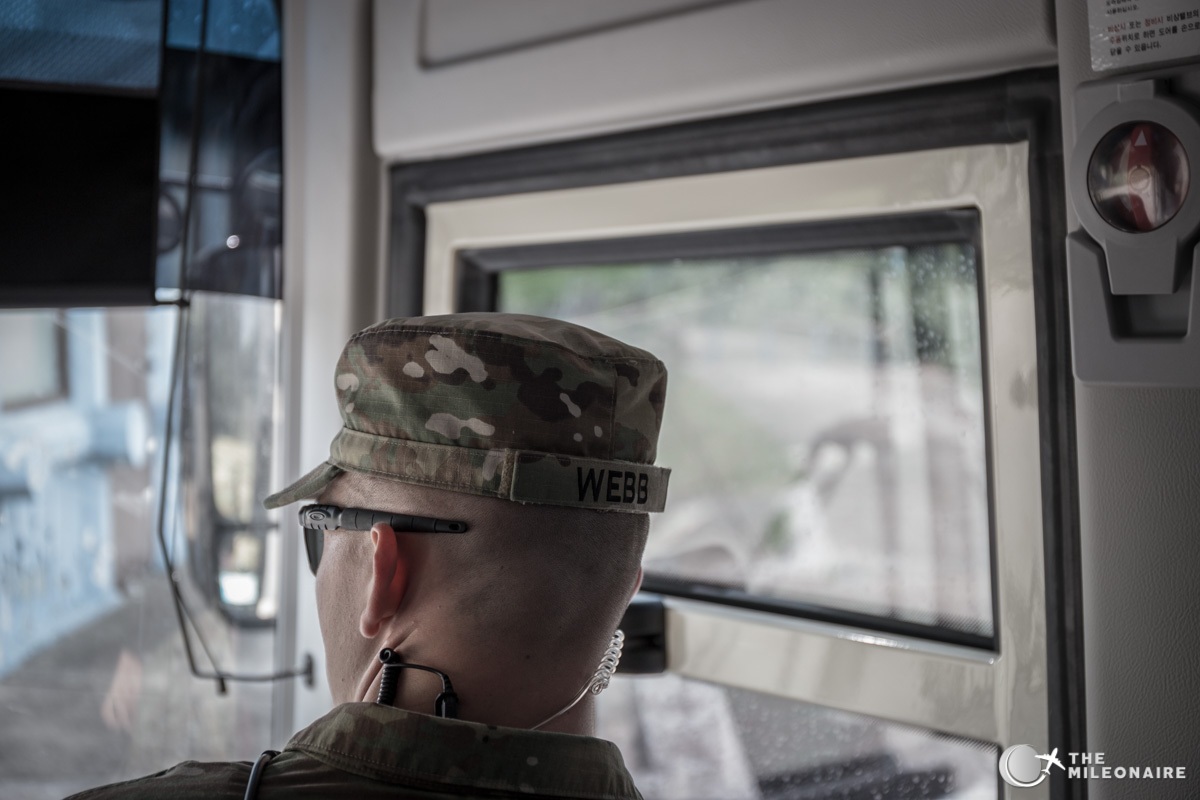 Afterwards the bus brought us back to Camp Bonifas, where everyone had the chance for a casual talk with the border soldiers (super interesting) and some souvenir shopping (yes, that’s a thing even at the Korean border).

At around 3:30PM we were heading back to Seoul with our bus to conclude an excellent 8-hour trip to the DMZ. The tour is definitely more than worth the money and was one of the travel highlights in my life so far. Some important things for you to make sure your visit is a success: