Because of the huge distance from my home bases Air New Zealand is sadly not one of the airlines I use a lot. This is quite sad though as Air NZ does not only excel when it comes to funny and creative safety videos (like this one, this one or this one), but also in terms of their general reputation as an airline.

This May I finally had the chance to test out the Air New Zealand Business Class in the 777 and the 787: I flew with the Boeing 777 from Brisbane to Auckland, and with the Boeing 787 onwards to Tokyo-Narita. Check out my trip report (and the ton of photos) below to see if it was worth the price!

The only bigger difference is the amount of seats per row: while the wider Boeing 777 features a 1-2-1 configuration, the new 787 Dreamliner has a 1-1-1 configuration. Yes, you read that correctly – a 1-1-1(!) configuration, which is extremely rare in today’s plane cabins. The window seats in this configuration are the same, while the middle seats are lined up on a waist-high wall in the center. Here you can see the Air New Zealand Business cabin in the Boeing 787 Dreamliner: 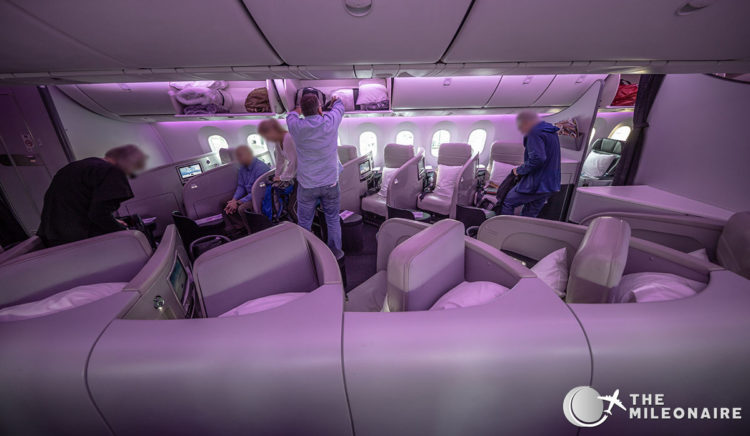 Here ist the cabin in the Boeing 777 which features two seats in the middle instead of one: 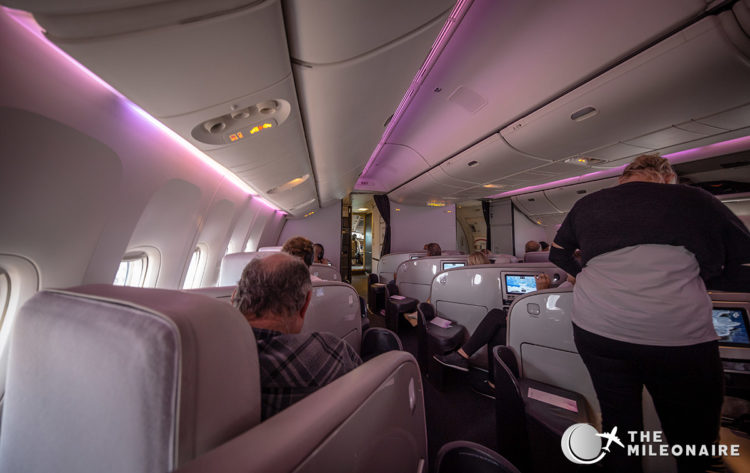 The cabin is completely covered in different shades of grey. The color in my photos stem from the mood lighting that mostly makes the cabin look purple or even pink. A matter of taste, yes – but I found the color not really ideal or premium. 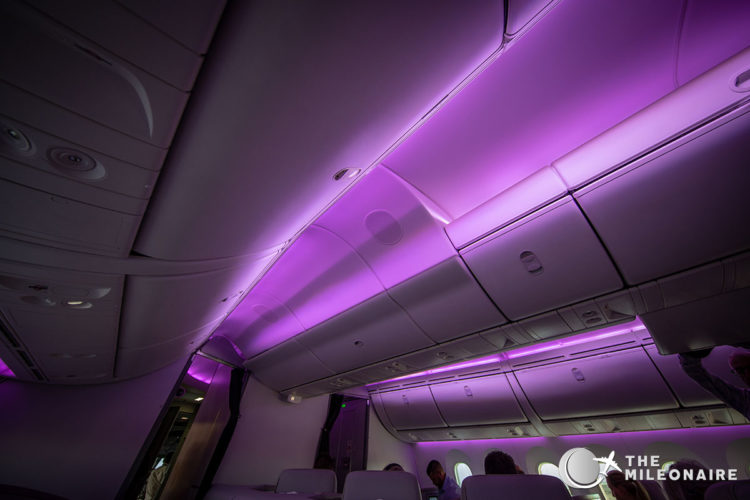 My biggest problem with the cabin is the non-reverse herringbone configuration though. Very often the best thing about flying is the view from the plane window, especially with some of the more exotic destinations Air New Zealand flies to. Why on earth do you then configure your seats in a way that makes it close to impossible to look out of the window without getting major neck strain? Instead you’re looking at a grey wall in the 787 or – even worse in the 777 – at the feet of your fellow co-travellers in business class. 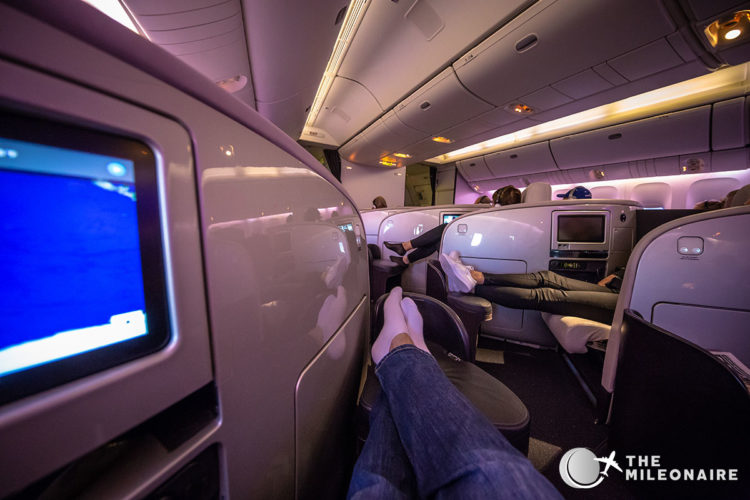 With this type of configuration you neither have the privacy of a single seat at the window, nor a good setup for couples travelling together. Should they sit opposite of each other and shout across the aisle when they want to talk to each other? Or should they sit next to each other, with huge dividers blocking their view? The more I think about it, the more frustrated I get with this configuration. I highly prefer the reverse-herringbone configuration that a lot of airlines use nowadays, for example what Cathay Pacific uses in their A350s.

For both of my flights with the Air New Zealand Business Class I chose a window seat (if you can even call them window seats). The seats in both plane types are the same: here is my seat in the Boeing 777… 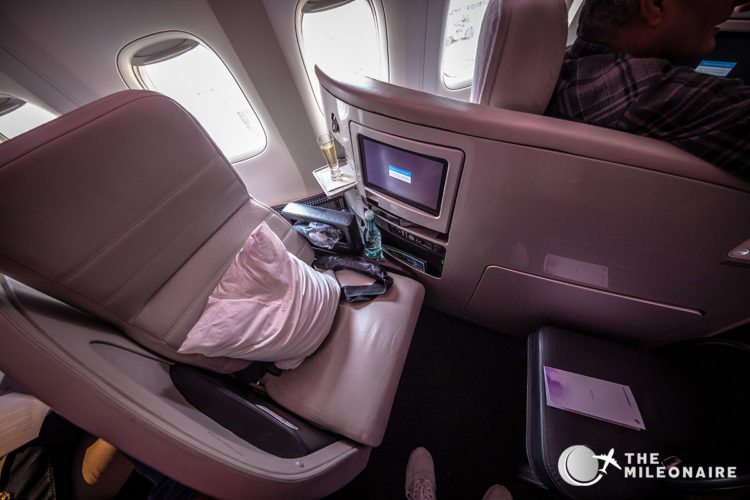 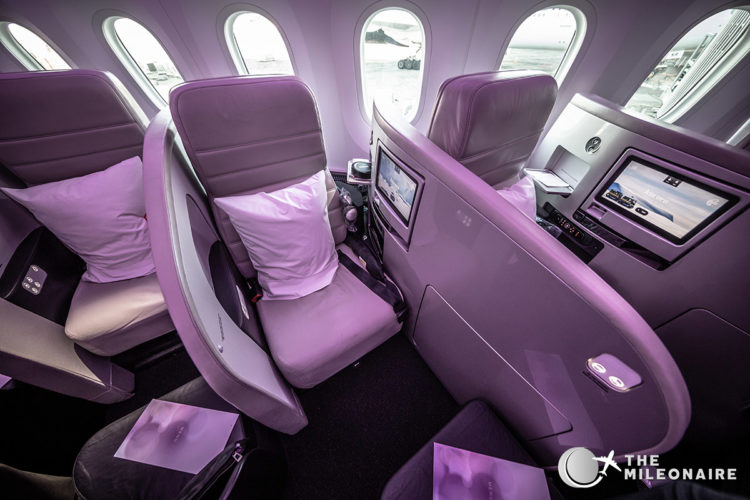 The ‘unlucky’ seat configuration also shows in the seat itself – somehow you always look at body parts of your fellow travellers, other airlines just offer more privacy. On my right I saw my neighbour’s feet, and the head of my other neighbour always peaked above the divider. In the 777 you’re looking at 2-3 additional set of feet. Yummy!

The seats itself are also narrower than more modern configurations: the solid walls to your left and right feel a bit claustrophobic, quite the opposite to the Singapore Airlines Business Class ‘Couch’ I experienced a few days before.

Speaking of feet: there’s an ottoman at the base of your seat where you can put your feet throughout the flight. This ottoman also has a seat belt, so other travellers can sit there for a chat (even though this might be awkward for your neighbours). 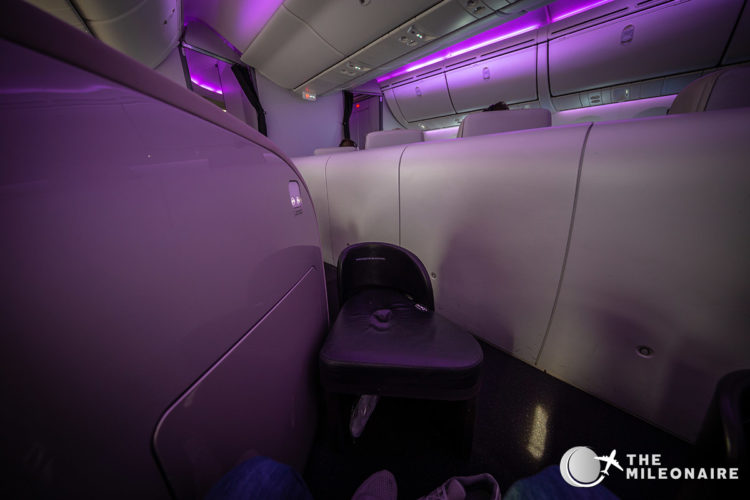 In the side panel of your seat is the screen that can be extended and used in lots of different positions. 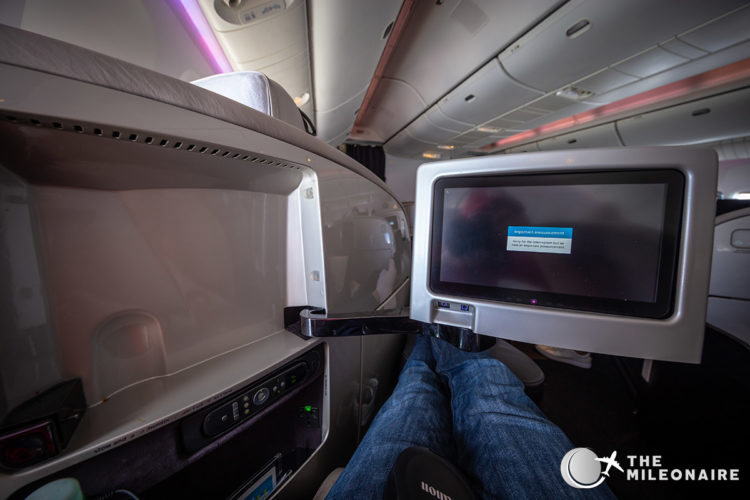 Below that is the handheld to control the Inflight-Entertainment System, your table, various plugs to charge your devices and the seat pocket with the safety card. There’s also a small lid you can open to put your drink there. 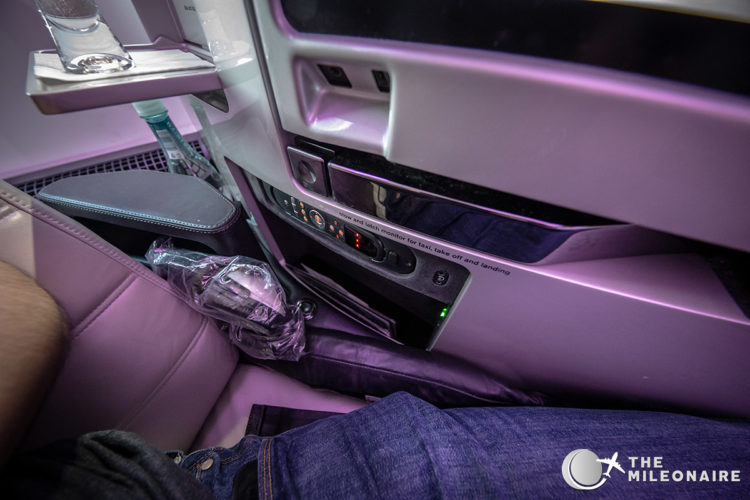 Speaking of the Inflight Entertainment System: Air New Zealand’s IFE is excellent, with a ton movies, TV series or albums. The usability is exceptional is well, and the display is perfectly fast and responsive. Other highlights were the offline version of Tripadvisor to check out your destination, as well as the map that lets you freely zoom into all the areas of the world. Here’s a little video I took to show the IFE:

On the other side of your seat are the seat controls. The Air New Zealand Business Class in the 777 and 787 offers lie-flat seats that can be converted into flat beds. The bed is quite comfortable, although a bit narrow. 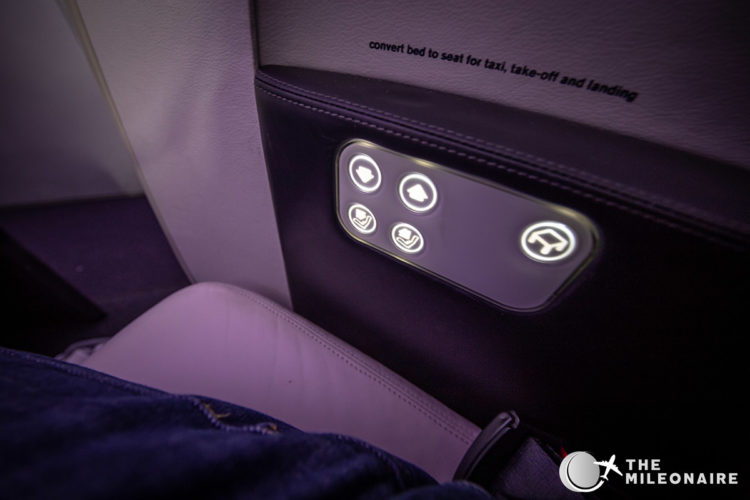 After the negative experience with the seat we’re finally coming to a more positive area: the service! The crews of Air New Zealand are know for their friendly and welcoming attitude, and I can confirm this 100%: the sincere ‘Kia Ora‘ was something I felt throughout my whole flight. The service onboard started with a glass of champagne and (sadly ice cold) nuts. Air New Zealand serves Billecart Salmon Brut NV in its Business Class: 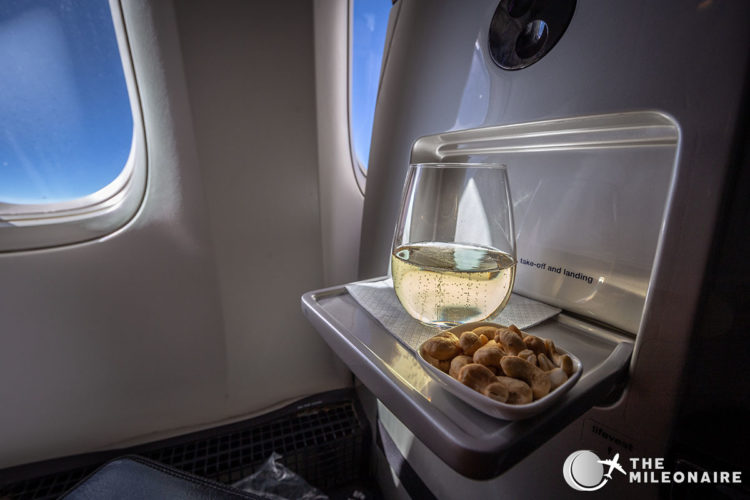 At your seat you’ll find the menu as well as some noise-cancelling headphones (which aren’t on the same level as the best ones out there). 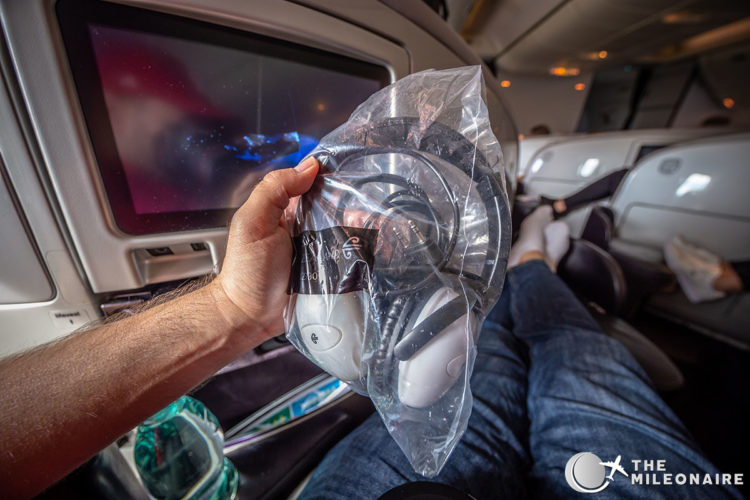 On my first leg from Brisbane to Auckland I had a delicious lunch with several nice options. Air New Zealand collaborates with various famous cooks to offer a taste of New Zealand in its Business Class. I started out with an appetizer, char sui pork filet with hoisin mayonnaise… 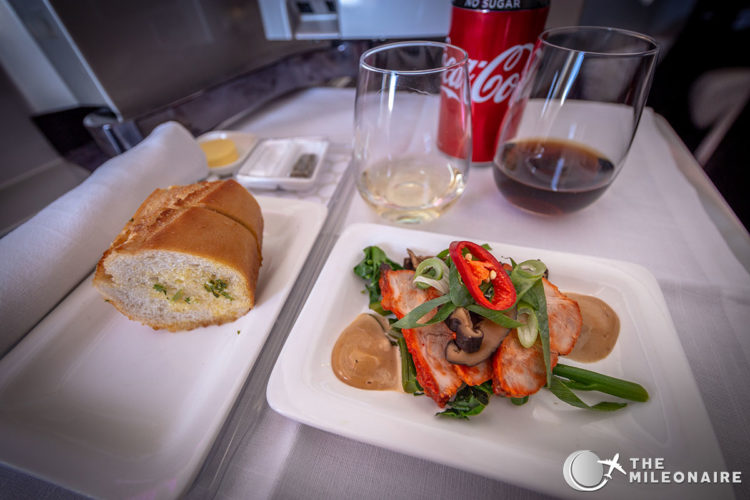 …followed by a chicken breast with cauliflower creme: 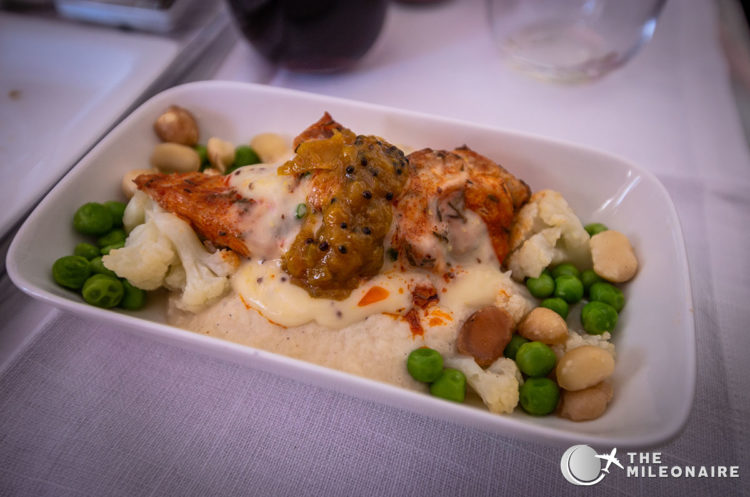 To top it all off, I had a delicious caramel cheesecake: 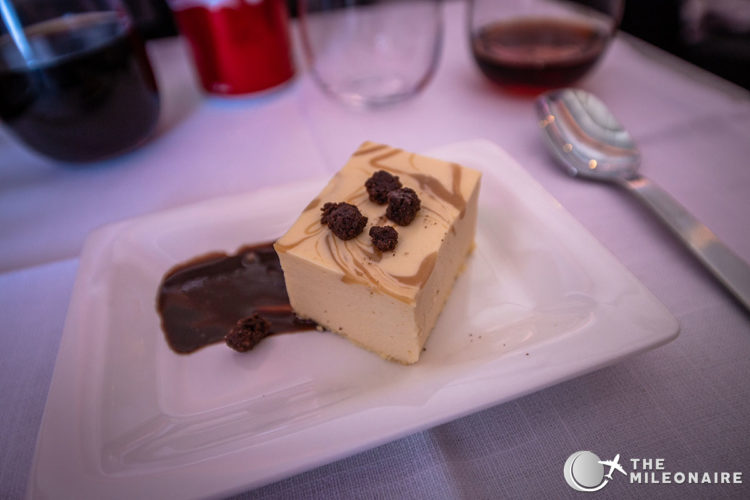 On the next segment from Auckland to Tokyo, the service started with a breakfast: it started with some fresh fruit… 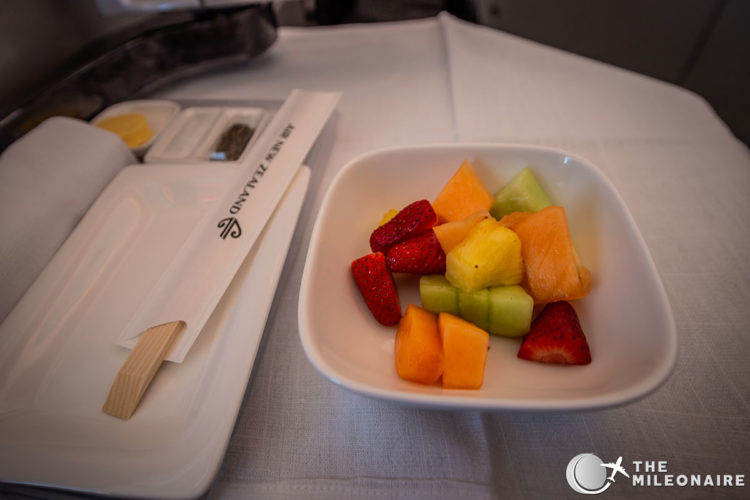 …followed by miso salmon with rice: 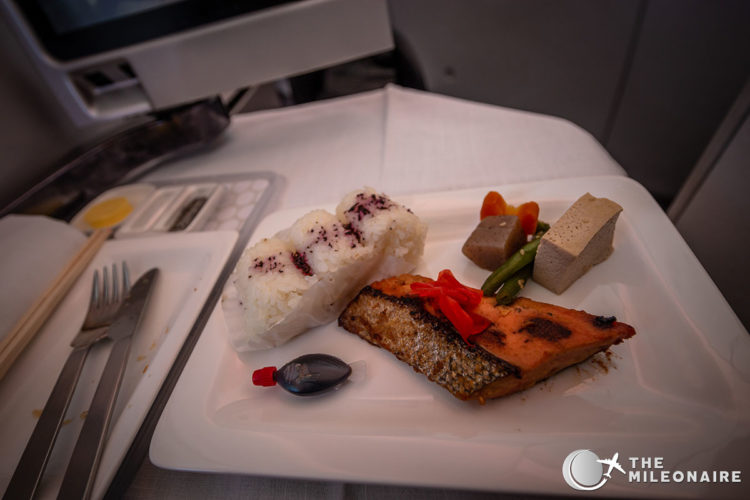 The lunch before landing in Tokyo consisted of an appetizer (prawns with mozarella and melon), plus some garlic bread… 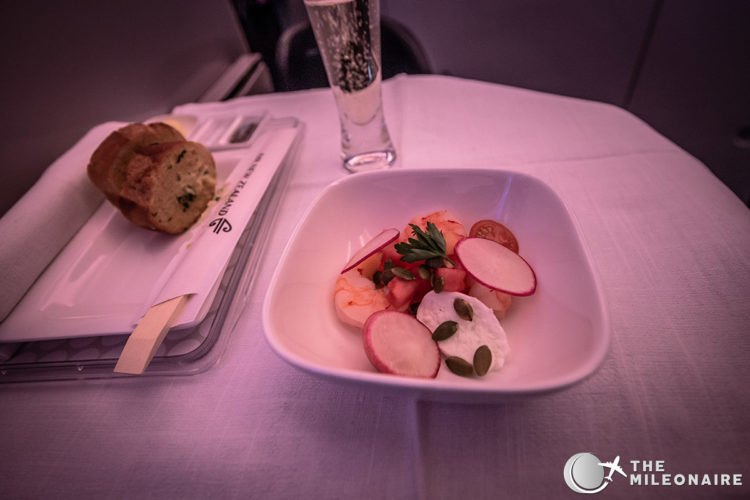 …and a tender pork belly as the Japanese option: 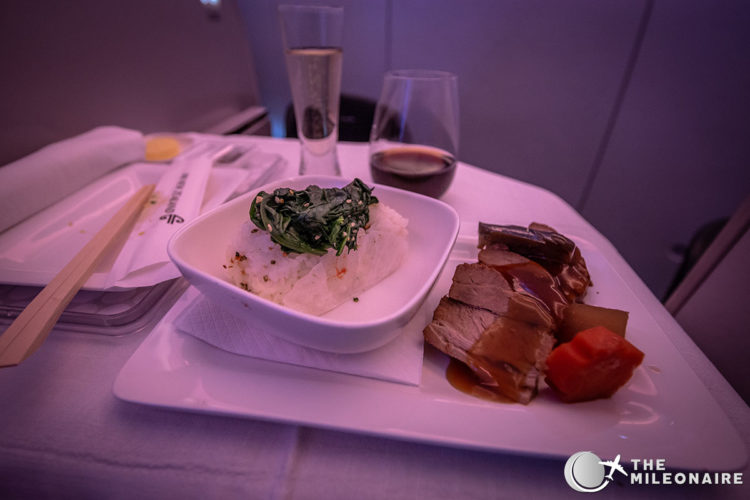 The service was strong throughout the whole flight, and the different dishes were on a good level. After both of these flights in the Air New Zealand Business Class I finally arrived in beautiful Tokyo. 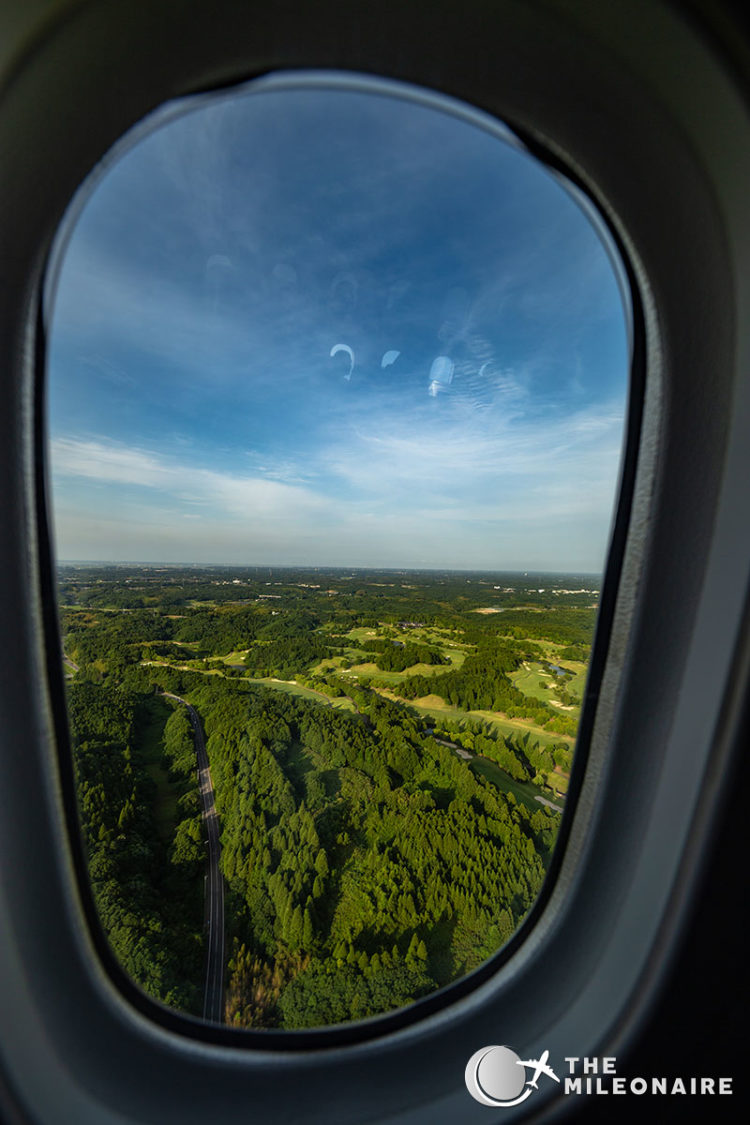 Soft product good, hard product meh: that’s how I would summarize my experience in the Air New Zealand Business Class. Even though a 1-2-1 or even 1-1-1 configuration looks impressive on paper (especially compared to some 2-2-2 or 2-3-2 cabins) I didn’t enjoy the setup as much. When booking a window seat I actually want to look out of the window without experiencing neck pain throughout my whole flight. Luckily the service and solid catering on board made up for it, but I sincerely hope the next iteration of Air New Zealand’s Business Class will feature a different seat.